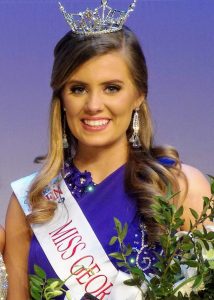 What’s the accepted stereotype of a homeschooled young woman? Painfully shy, bookish, given to classical music. Five years ago Julia Herrin certainly fit that stereotype to a T. But that young woman was nowhere in sight June 29 as Julia was named first runner-up for Miss South Carolina Teen.

Beautiful, talented, poised, confident, well-spoken. Julia was all of these and more. Her platform, #realnotperfect, emphasizes the importance of being real, no matter who you are, and being proud of who you are. She said she will continue to promote her positive social movement throughout South Carolina in the future.

Julia was relaxing with some friends at one of their favorite hangouts at Pinckney Island Nature Reserve in South Carolina when we caught up with her a few days after the competition.

Julia, 17, is a rising high school senior and Challenge IV student. She has been homeschooled since kindergarten and a Classical Conversations student since age 9. Her brother, Joel, graduated from Challenge IV last year, and her sister, Jenna Joy, is entering Challenge I this fall. Their mom, Jennifer, has been a Director and tutor and was an early CC Sales Manager for South Carolina.

Classical Conversations has been a very important part of Julia’s life and was integral to preparing her for life on the competition circuit. She is looking forward to Challenge IV this fall, even though some of her CC friends have moved away and she will have a smaller class. “In Challenge IV I know I will have to take the reins more in leading discussions, and I think that will be great preparation for college.”

Julia’s advice to Classical Conversations’ students who are interested in junior miss-type competitions? “Go for it! I learned so many skills through CC that prepared me for competition,” she said. “Public speaking for sure. Being able to think on my feet under pressure. Being comfortable conversing with adults. These are all things I began learning from the very beginning in CC.”

The Herrins live in Bluffton, South Carolina, just west of Hilton Head Island. Her father, Jeff, owns a music company and has served as a minister of music. Julia says her whole family is talented musically.

Julia was named Miss Georgetown Teen earlier this spring, a qualifying competition for Miss South Carolina Teen. In addition to being selected as first runner-up from among the 50 candidates, she was also named overall talent award winner as well as the preliminary talent award winner. She was also in the top five in the Quality of Life category for her service work. The Miss South Carolina Teen competition took place June 25-29 in Columbia.

Competition categories included fitness, talent, formal wear  and interview. For the talent category, Julia gave a piano performance The Battle Song from “The Chronicles of Narnia: The Lion, The Witch, and the Wardrobe,” for which she won both the preliminary and overall Talent Awards. For the formal wear and interview categories, Julia wore a peach, one-shoulder evening gown.

Five years ago Julia ran across an ad for a local competition. Painfully shy, with few friends and little self-confidence, Julia and Jennifer decided that entering the competition might help her develop some poise. That first year Julia didn’t win anything and was four years younger than any of the other contestants, but she enjoyed the experience. Kind of amazing since while exiting the stage after the interview portion of the competition, she caught her heel in the hem of her gown, ripped it and fell into the arms of the competition director just offstage. Nevertheless she decided to try again the next year.

Julia started winning local competitions almost immediately and was named second runner-up to Miss South Carolina Teen in 2017 as a 15-year-old, then first runner-up in 2018 and 2019. While Classical Conversations helped her with public speaking skills early on, it was the competitions that helped her develop poise in front of big audiences.

“The live audience Saturday was huge, but there were 3 million people watching the competition on TV!” Julia said. “I can’t even comprehend how many people that is!”

When asked about her strengths and weaknesses in the competition, Julia said she considered the interview to be her greatest strength ?? While confident and comfortable in the interview portion of the competition, her greatest weakness is closely related. “Self-doubt is my greatest weakness,” Julia said. “Am I good enough? Am I worthy of winning? I sometimes second-guess myself.”

When she goes to college in a year, Julia plans to double-major in music performance and communications. She said she also enjoys learning foreign languages and studying human anatomy for fun. She is currently considering attending Auburn University among others. While competing in Miss America’s Outstanding Teen program over the past five years, she has earned more than $20,000 in scholarships, which will help with her selection of a university.

“Saturday night was the finish line, the culmination of five years of learning and hard work,” Julia said. “I was first runner-up for Miss South Carolina Teen last year, and I had been hoping that it might be God’s plan for me to win this year. I was a little disappointed, but then I remembered that I had achieved all of my other goals—I had served my state, I had served the Miss America’s Outstanding Teen program and I had served the Children’s Miracle Network.”

Although Julia’s career on the Miss America Teen circuit is done, she could conceivably compete for seven or eight years in the Miss America organization. She said after a year or two in college, she plans to begin competing for Miss South Carolina. In addition to promoting her state and the Miracle Children’s Network, the $60,000 scholarship that goes with winning the title is a significant incentive and would help her pay for her college education.