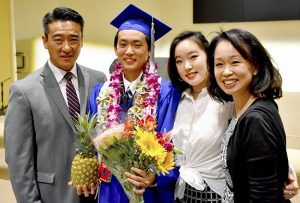 Julieta Woo says she has never won a drawing or a contest in her life, so she was surprised to learn there was a drawing for the recent Challenge Graduates Survey for Parents and Students and doubly surprised that she had  won the drawing and the $300 prize.

Julieta is a veteran homeschooler and veteran CC mom. She has always homeschooled her children, Derek, 18, and Zoe, 16, and enrolled them in a Classical Conversations community from the time they were 6 or 7. Along the way she has tutored Foundations and Essentials and directed Challenge B, III and IV. She even served as a Support Representative for a few years.

Julieta and her husband, Jae, and their two children live in Newhall, California, and Jae is pastor of a Korean-American church.

“I can’t rave enough about Classical Conversations and the students the Lord has allowed me to invest in through CC,” Julieta said. “What a blessing! CC has been perfect for our family.”

The closest CC community with a Challenge IV program is more than an hour away in Los Angeles, so Julieta taught Derek Challenge IV at home, which she concedes is not the best way.

“We really miss our community,” Julieta said. “I have to work a lot harder to tutor at home, and he really missed his friends.”

Still, Julieta plans to do the same this coming year with her daughter, Zoe, who is entering Challenge IV. Zoe has enough credits to graduate now but wants to continue to strengthen her classical education.

Derek was offered scholarships to University of California-Berkley and other California state and private universities and colleges, but he chose to attend The Master’s University in Santa Clarita where he plans to study premed.

Zoe was invited to participate in an exclusive eight-week program this summer at a Top 10 university. While her fellow students are quite liberal, Zoe still enjoys the Socratic nature of their discussions and learning from some of the top professors in the country.

“Classical Conversations has well prepared both of my children for what’s ahead in life,” Julieta said. “I love that Challenge doesn’t give them all the answers but promotes conversations.”

Classical Conversations® is a classical education resource used by homeschoolers in all 50 states and 30 foreign countries. CC now has more than 125,000 students enrolled in its tutoring programs, which are provided by more than 2,500 CC communities. CC provides resources, guidance and a community for a Christian home school curriculum using classical education in three developmental stages: grammar, dialectic and rhetoric.