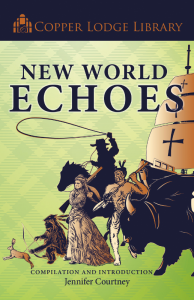 Southern Pines, NC—Fables, tall tales and poetry can be found in every culture in every era, and they can tell us much about who we are as a people and as individuals. Following hard on the heels of its very successful “Old World Echoes” last year, Classical Conversations has just released its counterpart, “New World Echoes.”

A hefty paperback of 368 pages, this new volume in the Copper Lodge Library is packed full of short stories, poems, color and B&W illustrations from the newer civilizations around the world including the U.S., Canada and Mexico, Latin America and South America, Iceland, the Caribbean, Australia and New Zealand.

New World Echoes is a read-aloud resource for CC families to accompany the Foundations Cycle 3 Memory Work. There are two short stories and one poem for each of the 24 weeks. The stories were chosen to correlate with the history and geography for the Foundations Cycle 3 Memory Work. Many stories and poems also serve to prepare students for the literature in Challenge.

“New World Echoes” is now available for purchase from the Classical Conversations Bookstore for $14.95.

These readings were selected so that families could spend about 30 minutes two-to-three times per week reading and discussing the stories and poems and memorizing the poems if desired.

Although still a relatively young culture, America is rich with larger-than-life characters, some like Davy Crockett and Calamity Jane, who were historical figures around whom legends grew, and some are tall tales from the ground up like Paul Bunyan and Babe the blue ox. Others have some basis in history but have become primarily tall-tale figures like Johnny Appleseed, John Henry and Casey Jones. The wide-open prairies and rapidly expanding frontiers of our young nation created settings for these colorful characters, but 21st-century kids will enjoy the stories, nevertheless.

The reader was compiled and edited by Jennifer Courtney. Jennifer and her husband live in Oklahoma and have classically home educated their four children for more than 15 years. She currently serves as the Content Development Manager for Classical Conversations MultiMedia, holds a degree in English, and has tutored art history in Western Cultural History. She is the co-author of “Classical Christian Education Made Approachable” and “Marvelous to Behold.”

Classical Conversations now has more than 125,000 students enrolled in its tutoring programs, which are provided by 2,500 CC communities in all 50 states and 39 foreign countries. CC provides resources, guidance and a community for a Christian home school curriculum using a classical education model in three developmental stages: grammar, dialectic and rhetoric.